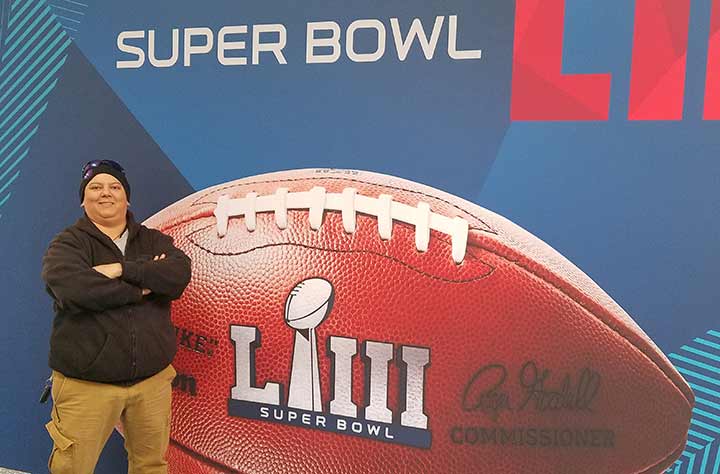 The life of a technical director

Some people never find their calling. Mo Guiberteau ’00 discovered hers on the set of an elementary school production about George Washington. Cast as a member of the original Tea Party, Mo also had the task of controlling the lights that simulated a storm. As the lights flickered, the ten-year-old thought, “Pretty cool,” and her path toward a career in technical theater was set. By middle school, she was running audio for a musical production. In high school she gained experience as a stage manager. By the time Mo entered Wesleyan, she had already built an impressive resumé. At her Wesleyan scholarship audition, she was the only student to present a technical portfolio, setting her apart from the other students who were performing monologues and dreaming of a career on center-stage or in front of a camera.

In her years since Wesleyan, Mo has worked for countless productions in the U.S. and abroad in almost every capacity of technical theater. She has worked for regional theaters throughout the country, toured with Disney on Ice, toured for two years with Cirque du Soleil, and worked with the national tour of My Fair Lady. She spent four years in Macau, China, with Franco Dragone’s House of Dancing Water, a show housed in the largest purpose-built theatre in the world.

Today Mo is an active member of the Atlanta Stagehand Union IATSE 927 where she fields job requests from clients, identifies labor and skillsets needed, provides estimates of costs, negotiates contracts, books labor, and oversees at the actual on-site performance. Mo oversees the labor and contracts for Live Nation venues as well as Wild ‘n Out on MTV. Earlier this year she oversaw a crew of seventy stagehands plus additional volunteers for the 2019 Super Bowl Half Time Show. The team prepared for almost three weeks with rehearsals two to three times a day in order to set up the stage, lighting, and audio in less than five minutes. For Mo, standing on the 50-yard line overseeing the crew who brought in the twenty-six carts for the stage, fourteen carts for the audio equipment, and more for lighting – well, the life of a technical director is still “pretty cool.”