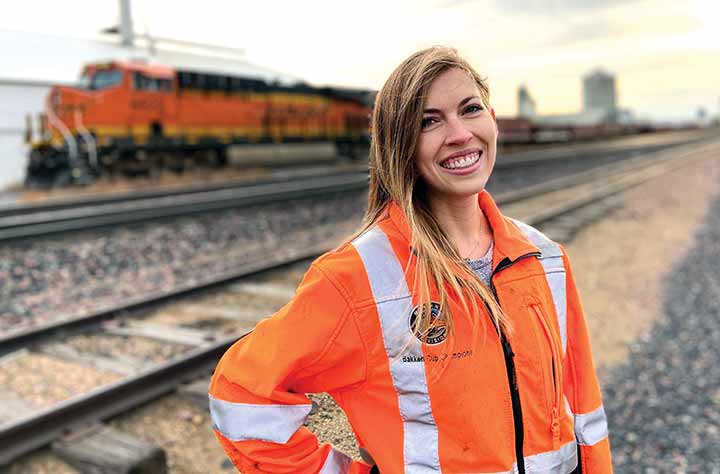 From freelance flower crown maker, to train conductor, to marketing director of her local hospital, Kyla Wall Burns ’12 has lived many occupational lives since graduating from Wesleyan, exemplifying how her liberal arts education prepared her for multiple fields.

After graduating with degrees in business administration and advertising and marketing communication (AMC), with a minor in studio art, Kyla moved back to her hometown of Glasgow, Montana, to assist her parents in installing a point-of-sale computer system in their local business. Glasgow is a small railroad community of 3,500 people just 60 miles from the Canadian border. After a year working with her parents, Kyla took her next career step in a direction far from what she ever imagined. She was hired as a train conductor for Burlington Northern Sante Fe (BNSF) Railway Company, the largest freight railroad network in North America.

“Becoming a conductor was the last occupation I ever thought I would have,” said Kyla. “I decided to apply on a whim because I was single, young, and had nothing to lose. I planned on staying with the railroad for one year while I saved money and found something in the marketing field, but I ended up really enjoying the work and stayed on for three years.”

Kyla says that the railroad life is not glamorous and that female conductors are not very common. In her conductor’s class of about 20 students, she was the only female. “One of the tests during conductor class is that you have to be able to change a knuckle all by yourself. A knuckle (one of the metal pieces that holds the train cars together and sometimes break en route) weighs between 75-85 pounds. For reference, I am 5’ 5” and about 110 pounds. You have to move a pin at the same time that you insert the knuckle, making it extra hazardous. I’m proud to say that I successfully changed a few knuckles throughout my career and still have all my fingers and toes.”

Train conductors are on call 24/7. The shifts are 12 hours long and often require working outside. The weather in Northeast Montana is not for the faint of heart. In summer, days are well over 100 degrees and winter days are often 40 degrees below zero. Trains can be over a mile long, and it is common for a conductor to have to walk all the way from the engine to the very last car to check the air break system or verify the cars on their train. “If there was anything that needed to be done on a part of the train that was not the engine, I would work on it. Sometimes that meant checking for things that were wrong on the cars, tying brakes on the cars, or dropping cars off along our route. That meant that I would take my radio and go back and separate the cars, switch the tracks, and either radio or hand signal to the engineer.* We moved grain, oil, mail, wind turbines, pipe, groceries, furniture - really anything that will fit on or in a train car.”

Kyla started thinking about changing occupations when she married in Brandt in 2016. The railroad lifestyle is not conducive to having a young family. Today the couple are parents to Harrison (2) and Rose Ella (3 months). “There are times when I would be called away from home for five days straight, and that would’ve been so hard if I had a newborn at home.”

In her new career Kyla serves as the director of marketing at Frances Mahon Deaconess Hospital where she enjoys doing something different most every day. Not only does she maintain the website and social media posts, she also oversees the local health fair, designs the annual report, works with the community on outreach projects, and facilitates design elements of a large remodel that the hospital is currently undergoing.

Kyla has found it easy to adapt between high-skill, high-demand careers. Being a marketing director has unleashed a new world of possibilities for her, thanks to the vast knowledge she obtained with her AMC degree. “I believe the diverse opportunities and challenges that were presented to me during my time at Wesleyan equipped me to be the type of woman that wouldn’t be afraid to try something new. I apply my Wesleyan education every single day.”

* An engineer is responsible for operating the locomotive. The conductor plays a supervisory role over the entire operation. The two work in unison.