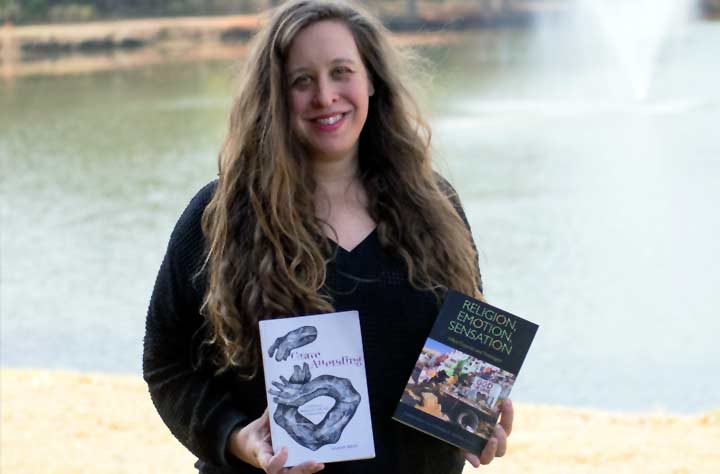 In her recently published book, Grave Attending: A Political Theology for the Unredeemed, Wesleyan College Assistant Professor and Chair of Religious Studies and Philosophy Karen Bray brings critical questions of embodiment, history, and power to the fields of political theology, radical theology, secular theology, and the continual philosophy of religion. Mapping the contemporary state of political theology, Bray brings it to bear upon secularism, Marxist thought, affect theory, queer temporality, and other critical modes as a way to refuse separating one’s personal mood from the political or philosophical.

Bray said, “I wrote this book to ask three key questions: What happens under such a system of belief to those who are not considered ‘profitable investments’ because of the status of their race, gender, ability (mental and physical), or sexuality? How have those of us considered profitable won our profitability through the ransom of those considered unprofitable? And, what are alternative mindsets, theologies, philosophies, and ways of living that could reshape where we find value? This makes the book a work of political theology, but one in deep conversation with critical theories of race, gender, disability, and emotion.”

According to Bray, the title of the book refers to an ethical call she makes in the book to "gravely attend." Grave attending is a call to pay attention to the parts of ourselves and our community that society decided were "unprofitable," "irredeemable," "abnormal," or "improper." Grave attending is also a call to be haunted by those parts society has tried to bury, but which might actually gift us alternatives for how we can live better together in the future.

Grave Attending has been nominated for the prestigious Louisville Grawemeyer Award 2021 which honors highly significant contributions to religious and spiritual understanding. The Grawemeyer Award in Religion is accompanied by a prize of $100,000.

Bray has published several articles and essays in journals and book volumes, but Grave Attending is her first single-authored book. She co-edited the book Religion, Emotion, Sensation: Affect Theories and Theologies to be released this fall. Both books are published by Fordham University Press.