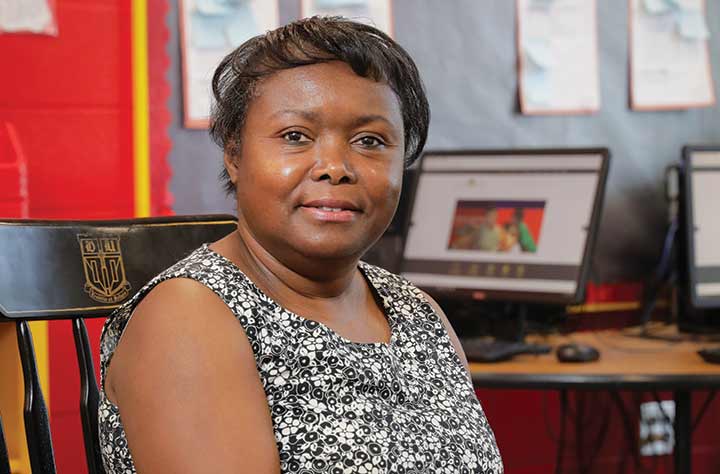 The only place you’ll find “success” before “work” is in the dictionary.

Early in life, “work” always came before “Christmas” for Jermila Slocumb ’11. As a child, her Christmas mornings were like drill inspections. Before she and her nine brothers and sisters could run to the living room to see what was under the tree, they had to complete a list of chores longer than the wish lists they recited on Santa’s knee. “Everybody had to make up their beds, brush their teeth, eat breakfast, and clean the kitchen,” she said. “The house had to be straight before we could open our presents.”

The Nowlin family had a strong work ethic – a hard-hat, roll-up-your-sleeves mentality that put food on the table and a sense of pride in their hearts. In the third grade, Jermila would help her grandfather clean office buildings. He used the experience as a teaching moment, instilling in his granddaughter an appreciation for hard work and doing the right thing. Her love of labor became a labor of love.

Jermila Slocumb is one of the hardest-working women I’ve ever met. She has punched a time card at everything from being a nanny to working at a pet store to selling clothes to serving as a school paraprofessional. She returned to college to finish her degree in education, and graduated from Wesleyan College six years ago at age of 54 with a 3.7 grade point average.

Jermila is now a second-grade teacher at Veterans Elementary in Macon. She constantly reminds her students about the importance of getting an education and making sacrifices. “I tell them working hard won’t kill you,” she said. “It makes you stronger. It helps you in all phases of life, from problem solving to time management. It makes you a more efficient person.”

This has been an extra-special year for Jermila. She celebrated her 60th birthday last September and became grandmother to Micah James Whidden in November.

Her mother gave her the unusual name Jermila (pronounced Jerr-meela) after a man visited their church in Norfolk, Virginia. “He was from the Middle East – Jerusalem, I think – and Jermila was the name of one of his daughters,” she said. “My mother heard it and fell in love with it.” Jermila has never met anyone with the same name. A few years ago, she learned it means “beautiful” in Arabic.

Jermila graduated from high school in 1975 and enrolled at Oakwood University, a Seventh-day Adventist college in Huntsville, Alabama, where she was a biology major. There, she met her husband Michael who was from Macon. Her mother was not pleased when she married in her junior year and did not finish college. She intended to go back, and even enrolled in a few classes at the University of Alabama and Macon State College (now Middle Georgia State University). But it was difficult to regain her traction once she began having children and started working a variety of jobs to help support her family.

She and Michael moved to Macon in 1987 to be close to his family. She worked part-time at The Gap at Macon Mall and later began working as a parapro at Hartley, Burghard, and Springdale elementary schools. One day, a friend asked her to help with some housekeeping at the home of Dr. Mark and Mary Ellen Grossnickle. She became like a member of their family over the next five years. “If someone had told me I would become a nanny for a white family in the South I would have told them they were crazy,” Jermila said. “But it was such a unique relationship. There was a level of honesty and mutual respect. They trusted me to take care of their family, and that was not something I took lightly.”

Jermila told Mary Ellen Grossnickle she had two goals — to buy a home and to finish college. She enrolled at Wesleyan and began pursuing at degree in education, with aspirations of becoming a teacher.

“I had always wanted to go back and get my degree,” she said. “I wanted to finish, and I kept stabbing at it. When I got to Wesleyan, that’s where I planted my flag.”

No one said it was going to be easy. She would leave her job as a parapro at Springdale at 4 p.m. and attend classes at Wesleyan from 4:30 to 9 p.m. She would study at the library until midnight, then camp out in the student center until morning, working on projects and papers. There were times when she functioned on as little as an hour’s sleep.

“Jermila is very goal oriented. She wanted to go to college, so after working two jobs to help pay for her children’s education, she did. She found ways to keep moving forward. Her determination, perseverance, and her faith called her to teach underserved children,” Grossnickle said. “Jermila is a remarkable person. She’s calm and steady and has a soothing presence. But she’s also demanding, so I’m sure she gets great results from her students.”

Jermila is very proud of her children. Her oldest daughter, Mena Octavia, is a nurse at the Medical Center, Navicent Health. Mya Olivia has a master’s degree in global affairs. Her twin sister, Mia Ophelia, has a degree in psychology and a master’s in art therapy. Her son, John, is pursuing his degree in information technology and cyber security at Middle Georgia State University.

A solid work ethic is their pedigree.

Special thanks to Ed Grisamore who teaches journalism and creative writing at Stratford Academy in Macon, and to The Telegraph, where Ed’s column appears on Sundays, for allowing Wesleyan to reprint this story. December 2017