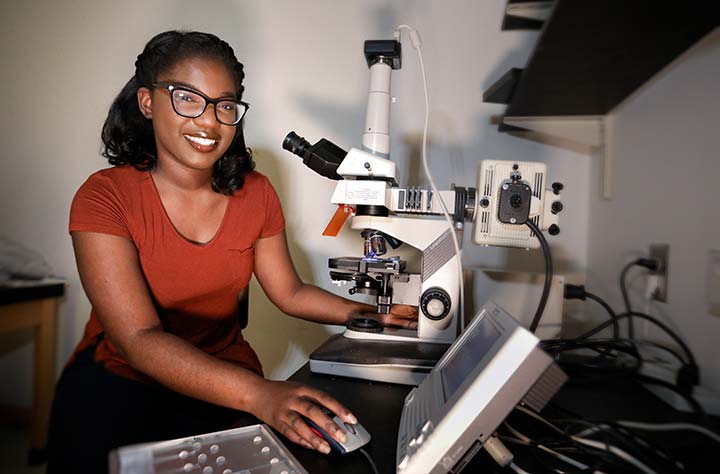 After her sophomore year, Alex was introduced to biomedical research involving cardiovascular health at the University of Louisville. “My project focused on the changes in the metabolic profile of regenerating planarian (worms!). The rationale for the project was to get an understanding of how metabolic changes might allow the tissue of organs like the liver to regenerate. Future studies will hopefully provide insight as to how organs such as the heart can be manipulated in a way that they are able to regenerate themselves after damage.”

Last summer Alex conducted research at MD Anderson Cancer Center. According to Alex, cancer is able to escape destruction by the body’s immune system by expressing proteins that inactivate immune cells. So, although the body detects the cancer cells, the immune system is essentially “turned off” upon recognition. Her project focused on how the different proteins expressed by cancer cells differentially regulate T cells. While at MD Anderson, Alex attended a birthday party for Dr. James Allison, who was awarded the 2018 Nobel Prize in Physiology for Medicine.

In addition to volunteering for the Lane Center, Alex was a member of the Wesleyan College Premedical Society all four years and served as president her senior year. A member of Beta Beta Beta and Phi Kappa Phi National Honor Societies, she also served as a T3 facilitator for two introductory biology classes, a teaching assistant for biology and chemistry, and an Academic Resource Center tutor. At Honors Day in April, Alex was presented the Biology Outstanding Senior Award for Honors in an Academic Discipline.

Alex is taking a gap year to work in the lab in Louisville where she worked two summers ago, while also applying to M.D./Ph.D. programs.

“I’ve know for some time that I want to practice medicine, but at Wesleyan, I developed an interest in research too. In my chosen career I will get to do both.”

This article ran in WESmag Spring 2019.