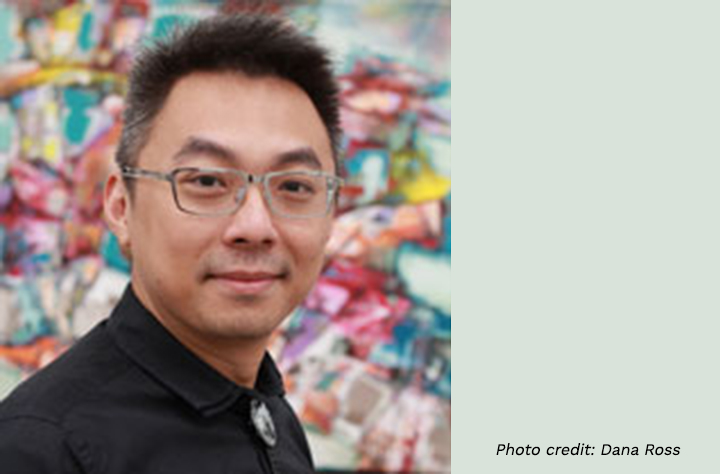 Composer and pianist Alan Chan was the winner of the first ASCAP George Duke Commissioning Prize in 2015. His imaginative composition “Denali World” was premiered by the 67-piece Symphonic Jazz Orchestra in 2017. He is also a winner of the ArtEZ International Jazz Composition Contest (the Netherlands, 2011), Percussive Arts Society Composition Contests (2004, 2008), together with awards and fellowships from the Los Angeles County Arts Commission and Ucross Foundation, among others.

The 17-piece Alan Chan Jazz Orchestra (ACJO) was founded in 2011, and is comprised of top studio/jazz musicians in Los Angeles, to perform compositions and arrangements by Alan. Their debut "Shrimp Tale" album was released in 2014, which received rave reviews and radio plays across the U.S. ACJO appears in Los Angeles venues such as the Baked Potato, Vibrato Grill Jazz, Vitello’s, Catalina Jazz Club, Westin Bonaventure Hotel and the Jonathan Club. He had presented his music at the Brooklyn Public Library, Stone NYC and ShapeShifter Lab in New York City.
In recent years, Alan Chan began to collaborate with Chinese instrumentalists to explore the possibility of merging jazz, improvisation and traditional Chinese vibes into a dramatic and innovative form. ACJO’s on-going project “Moon Walk,” with pipa (Chinese lute) virtuoso Min Xiao-Fen (New York City), was premiered in Los Angeles in August 2018 and subsequently on the East Coast at Brooklyn Central Library in New York City in February 2019. It received a review from Mark Swed of the Los Angeles Times. The newest version of the project will be performed at the Jazz Education Network Conference in Orlando, Florida in January 2023.

The “Camel Walk” project, started in 2016 with the prominent performer of suona (Chinese trumpet) Guo Yazhi (Boston), received its first performance of the complete version on the Marsee Auditorium stage on May 10, 2019.

Alan Chan’s music often takes inspiration from his life experiences around the world, with a take of surprising wittiness and humor. Coming from a classical background, he began composing for jazz big band under the mentorship of Gary Lindsay in Miami, then Vince Mendoza and Shelly Berg in Los Angeles, and Jim McNeely who fanned his flame of desire to create works for jazz ensembles.

As an educator, Alan directed the El Camino College Concert Jazz Band and the Jazz program for five years. He presented more than 20 concerts in the community, and conducted over 120 big band compositions from across jazz style periods. His work as an Adjunct Professor and Coordinator of the ECC Jazz Festival has earned him Achievement Award for Distinguished Teaching and Student Learning in December 2017 from Academic Senate.

Alan was a guest artist and clinician at the Hong Kong Academy for Performing Arts (HKAPA), Hong Kong Jazz Summer 2016, and American Society of Music Arrangers and Composers (ASMAC). He was a judge at music competitions such as Percussive Arts Society Composition Contests, SCI/ASCAP Student Composition Awards and ASMAC’s Bill Conti Big Band Arranging and Composing Competition. He is a voting member of the Recording Academy.