In 1840, Catherine Elizabeth Brewer Benson became the first woman to receive her degree from the first college in the world chartered to grant degrees to women.

Catherine Elizabeth Brewer Benson 1840 In the 1839 Georgia Female College catalog, twenty young women are listed in the Junior Class. Of this number, eleven graduated on the night of July 16, 1840, and were pioneers in education for women. By virtue of being alphabetically the first in line, Catherine Elizabeth Brewer was the first woman to receive her degree from the first college in the world chartered to grant degrees to women.

Almost half a century later, in her remarks to the graduating Class of 1888, Catherine Brewer Benson spoke the words that have become known as the Benson Charge, “Members of the graduating class, demands will be made upon you which were not made upon us. Your training, if you are true to it, will amply qualify you to meet those demands. No wiser blessing could I wish for you than that you may be true to every God-appointed work.”

Catherine was born in Augusta, Georgia, in 1822. Her parents had moved to Georgia from Brookline, Massachusetts, and always planned to send their daughter back east for school. Then her father got word of a new school in Macon, and on opening day, Catherine was enrolled in the Georgia Female College, now Wesleyan College.

In November 1842 Catherine married Richard Benson. Her interests were largely centered on her home and family, where she reared their ten children. Living in Macon, she regularly attended meetings of the Wesleyan Alumnae Association which was organized in 1859, the first association of its kind in the world. Today, the Candler Alumnae Center (formerly the Candler Memorial Library, constructed in 1928) houses the Benson Room, named in honor of Wesleyan’s first graduate. It is filled with artifacts such as early diplomas, clothing belonging to former students, and yearbooks dating back to the turn of the century. 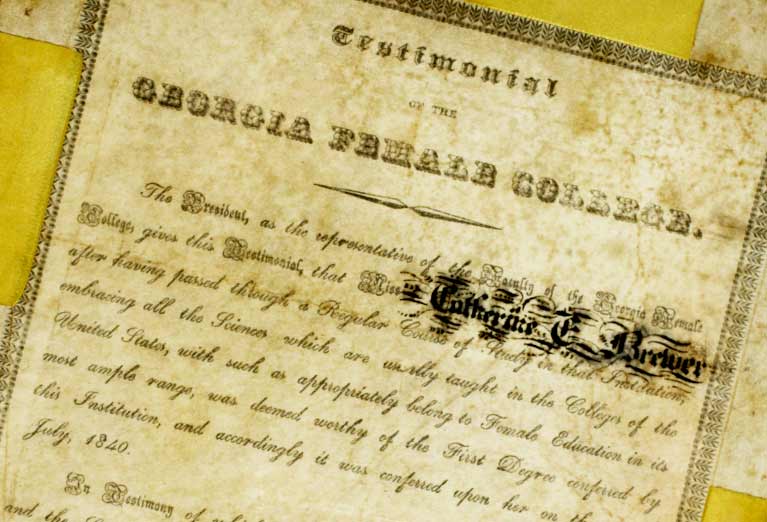