The Lane Center for service and Leadership

The Lane Center for Service & Leadership strives to enhance the student experience through active and diverse engagement opportunities in the Wesleyan and Macon communities. In overseeing the areas of civic engagement, leadership, and student involvement, the Lane Center provides students with experiential learning opportunities that will prepare them for life-long learning and community engagement.

Ways to Get Involved

The Lane Center promotes all events that are open to the student community at Wesleyan. To find out what’s happening on campus, check out the following resources:

Through the coordination and promotion of service opportunities and partnerships in the Macon community, the Lane Center prepares students to be engaged citizens in their communities. From small weekly programs to large WOW-a-Day! service events that include the entire Wesleyan community, the Lane Center offers meaningful service-oriented opportunities for students throughout the academic year. Check out the GivePulse app for more information about our Campus Partners, upcoming service events, and how to get involved.

Using the Social Change Model of Leadership Development, the Lane Center provides a variety of programs, workshops, and services to help students develop their leadership skills at Wesleyan. We believe that leadership is more than just a position; it is a process that all students can learn.

The Student Government Association (SGA) is the student body’s representation before administrators, faculty, the Board of Trustees, and alumnae. All members of SGA are elected by their peers each year. In addition to tackling policy issues that matter to Wesleyan students, SGA approves new student organizations, addresses student concerns, and hosts programs and workshops to benefit the campus community. For more information or questions about SGA, email sga@wesleyancollege.edu.

For nearly a decade, Wesleyan’s Lane Center for Service and Leadership has served as the heart and soul of wesleyan's ongoing work of preparing women for lifelong service to others.

Twice yearly, the Lane Center coordinates the mass-volunteer service effort known as WOW! A Day for Macon. In one day, Wesleyan students, faculty, and staff depart from campus to engage in simultaneous work with partner agencies on a broad spectrum of community needs. Not only do WOW! A Days enhance student engagement in the community, exposing them directly to real world experiences, they also spearhead Wesleyan’s efforts to infuse service learning both inside and outside the classroom. Community populations include senior citizens, at-risk children and youth, homeless, sick and community clean-up projects.

Number of student hours devoted to WOW! A Day.

Pounds of food collected during a food drive for The Mentor's Project.

Number of total community service hours by our students.

Wesleyan has earned a spot on the Presidential Honor Roll every year since the community service recognition program began in 2006, including the Honor Roll with Distinction Award for three consecutive years (2008, 2009, and 2010) – an honor no other college or university in the state can claim. In addition, the Carnegie Foundation for the Advancement of Teaching selected Wesleyan College as one of 240 U.S. colleges and universities to receive its 2015 Community Engagement Classification. 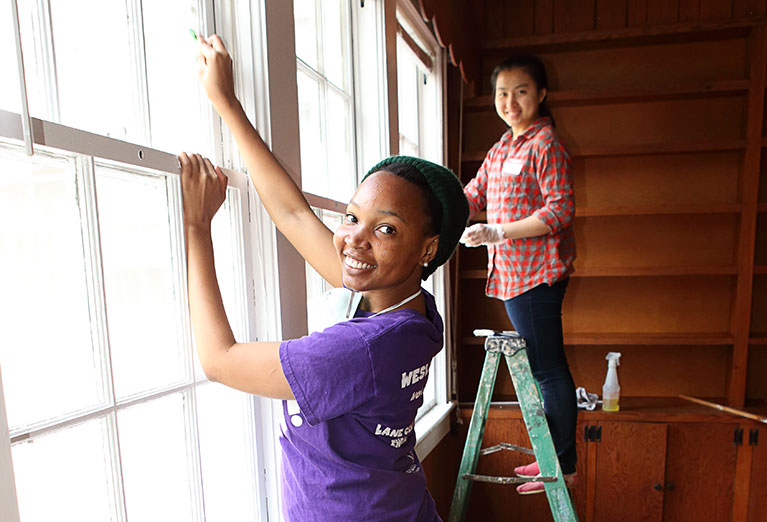 The Wesleyan experience is designed to cultivate tomorrow’s leaders - women invested and fully engaged in their community. Students are united with the community through the Lane Center for Service and Leadership, established by Wesleyan in 2002 as a focal point of community service and engagement in Central Georgia and to serve as a national role model for other colleges and communities.

While students have a wide variety of opportunities to serve the community outside the classroom, the Lane Center staff also works with faculty to incorporate service into course curriculum. Nearly one-third of our faculty representing 11 departments are incorporating service learning into their pedagogy, and approximately two-thirds of our students are taking courses that incorporate service-based assignments.

People from diverse backgrounds unite toward a common goal, building a sense of community.

Volunteers are almost twice as likely to donate to charities as non-volunteers.

Volunteers develop a strong interest in current events and local government, and are much more likely to vote and feel civic responsibility.

Learn to understand one’s own competence and individual/collective capabilities.

Gain knowledge to assist in building sustainable models and to meet long-term needs in response to service to others. Help others realize they have value.

Being a Servant Leader

Twice yearly, the Lane Center coordinates the mass-volunteer service effort known as WOW! A Day for Macon. In one day, Wesleyan students, faculty, and staff depart from campus to engage in simultaneous work with partner agencies on a broad spectrum of community needs. Not only do WOW! A Days enhance student engagement in the community, exposing them directly to real world experiences, they also spearhead Wesleyan’s efforts to infuse service learning both inside and outside the classroom.