Wesleyan climbing in the ranks

Wesleyan College is regularly ranked in several of the nation’s largest "Best Colleges" polls. Depending on the ranking organization, the findings are based on a wide array of data and information, and can include such areas as, affordability, green efforts, campus diversity, graduation rates, professor-to-student ratio, job placement rates, student satisfaction, alumnae success rates, and others. 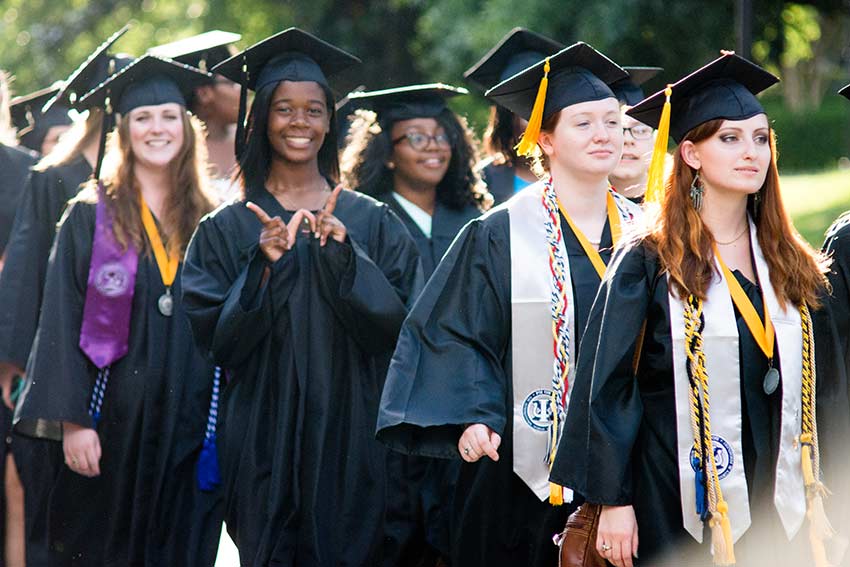 Wesleyan College′s online programs ranked among the best in the nation by U.S. News

Having assessed the overall academic quality of more than 1,641 online programs, U.S. News ranks Wesleyan’s Online Bachelor’s in Business Program 65th in the nation and their Online Bachelor’s Programs overall 256th best in the nation. Wesleyan’s ranks are particularly impressive considering the College introduced online programs less than two years ago to include business, accounting, and applied psychology. Wesleyan’s trademark small-class-sizes are taught mostly by full-time faculty and feature synchronous collaboration with instructors and classmates.

In its 2021 list of Best Colleges, U.S. News includes Wesleyan among the Best National Liberal Arts Colleges with special recognition in the Social Mobility Index category for enrolling and graduating large proportions of financially disadvantaged students awarded with Pell Grants. The vast majority of these federal grants are awarded to students whose adjusted gross family incomes are under $50,000.

The website salutes a total of only 655 colleges that The Princeton Review recommends over five regions: Northeast, Southeast, Midwest, West, and International. These 655 colleges constitute just 23% of the nation's four-year colleges. The schools are selected primarily for their excellent academics but The Review also factors in what students report about their campus experiences.

Wesleyan Ranked as a Top Five Best College in Georgia

According to the personal-finance website WalletHub, Wesleyan College is one of three Middle Georgia colleges ranked in the top ten of the 2020’s Best Colleges within the state. WalletHub ranks the colleges as follows:

Georgia Institute of Technology ranked 1st, Emory University ranked 2nd, and the University of Georgia ranked 3rd. In a breakout of top schools based on region, Wesleyan is ranked 27th out of 328 campuses in the southeast.

Wesleyan is ranked the fourth safest school in Georgia in a newly-released 2019 college rankings report by the consumer research website WalletHub.

Wesleyan Ranked #2 in Best Christian Colleges in Georgia for 2021

With a near perfect score of 99.6, Wesleyan College ranks as the second best Christian College in Georgia according to EDsmart. Emory University ranked first with a score of 100.

Chartered as the Georgia Female College on December 23, 1836, Wesleyan was founded through the efforts of a group of Macon citizens and the Georgia Conference of the Methodist Episcopal Church as evidence of their concern for the education of women. Wesleyan is grateful for her long-standing relationship with the United Methodist Church and the spiritual grounding it provides. From this foundation, the College embraces opportunities for interdenominational and interfaith dialogue, and celebrates the many religious traditions represented at Wesleyan.

EDsmart gathered information from the U.S. Department of Education websites, College Scorecard and College Navigator, in order to help students assess the affordability and value of top Christian colleges in Georgia. The rankings are based on data that covers four main areas:

Furthermore, Wesleyan students who major or minor in Religious Studies or Philosophy and earn a 3.0 GPA or higher have the unique opportunity of guaranteed admission into a Master of Divinity or Master of Religious Life program at Emory's Candler School of Theology (one of the top theological schools in the country).

The College Consensus methodology pulls together rankings from Forbes, Money, U.S. News & World Report, The Wall Street Journal, Wallethub, and Washington Monthly. Then we average thousands of real student review scores from sites like Cappex, Niche, Student Review, and others, to get the full picture of how students see their colleges to produce a unique College Consensus rating for each school.

According to James magazine, Wesleyan College ranks #6 among the Top Ten Colleges in Georgia for 2020. Rankings are based on undergraduate institutions that offer limited, if any, graduate programs. James’ rankings are based on criteria that include admissions standards such as standardized test scores, career placement after graduation, and more. This is the second year Wesleyan has appeared on the prestigious list.

In 2018, James ranked Wesleyan as a Top Success Rate college. This set of rankings list the colleges and universities that are tops for making sure their students have the tools to graduate and succeed.

For the second consecutive year, Wesleyan is one of the nation's most environmentally responsible colleges, according to The Princeton Review. The College earned a rating of 84/99.

The Princeton Review chose the 413 schools based on a survey the company conducted in 2018–19 of administrators at hundreds of four-year colleges about their institutions’ commitments to the environment and sustainability.

"We salute—and strongly recommend—Wesleyan to the many environmentally-minded students who want to study and live at a green college," said Rob Franek, The Princeton Review's Editor-in-Chief.

Franek noted that college applicants and their parents are increasingly concerned about the environment and sustainability issues. Among the 11,900 teens and parents The Princeton Review surveyed earlier this year for its 2019 College Hopes & Worries Survey, 64% said that having information about a college's commitment to the environment would influence their decision to apply to or attend the school.

According to Kiplinger, the 80-year-old Washington, D.C., based publisher of business forecasts and personal finance advice, the average sticker price at private nonprofit colleges, including tuition, fees, and room and board for the 2018-19 academic year was $48,510. Wesleyan’s price was 30% lower at $34,030 -- $14,480 below the national average -- proving that students don’t have to pay a fortune or rely on financial aid to attend a top-quality private college or university.

NOTE: Wesleyan College is among a growing number of colleges and universities to sign a statement prepared by the Education Conservancy advocating changes in the U.S. News annual college ranking. By signing the statement, Wesleyan specifically agreed not to participate in the U.S. News peer assessment survey but will continue to provide all other data to the publication. By opting out of the survey’s largest section, colleges intend to encourage U.S. News to alter its methodology, to promote best practices within the higher education industry, and to offer consumers a better resource guide. Wesleyan College supports a national initiative to provide comprehensive public information to help prospective students judge the quality of higher education institutions. Go to: www.ucan-network.org